Should you’ve been fortunate sufficient to expertise it, you realize that Bike Play is a really particular factor. Held throughout Pedalpalooza annually since 2009, Bike Play is is a magical meld of open-air theater, a bunch bike trip, and public house activism. Created and executed by a forged {of professional} actors who began as The Working Theater Collective, Bike Play is a bike-themed manufacturing that makes use of public areas as its backdrops. With minimal props and carrying all the things on their bikes, the actors use playgrounds, plazas, and their prodigious skills to convey enjoyable tales to life. The multi-day exhibits have turn out to be a favourite of many Pedalpalooza followers.

A type of followers is BikePortland Occasions Editor Maritza Arango. She noticed this yr’s present, dubbed “The Resurrection”, and was so excited she wished to study extra concerning the actors behind it and the way they put all of it collectively. Earlier this week Maritza caught up with Bike Play producer Noelle Eaton and two different forged members — Kristopher Mahoney-Watson and Nick Fenster — for a enjoyable dialog. 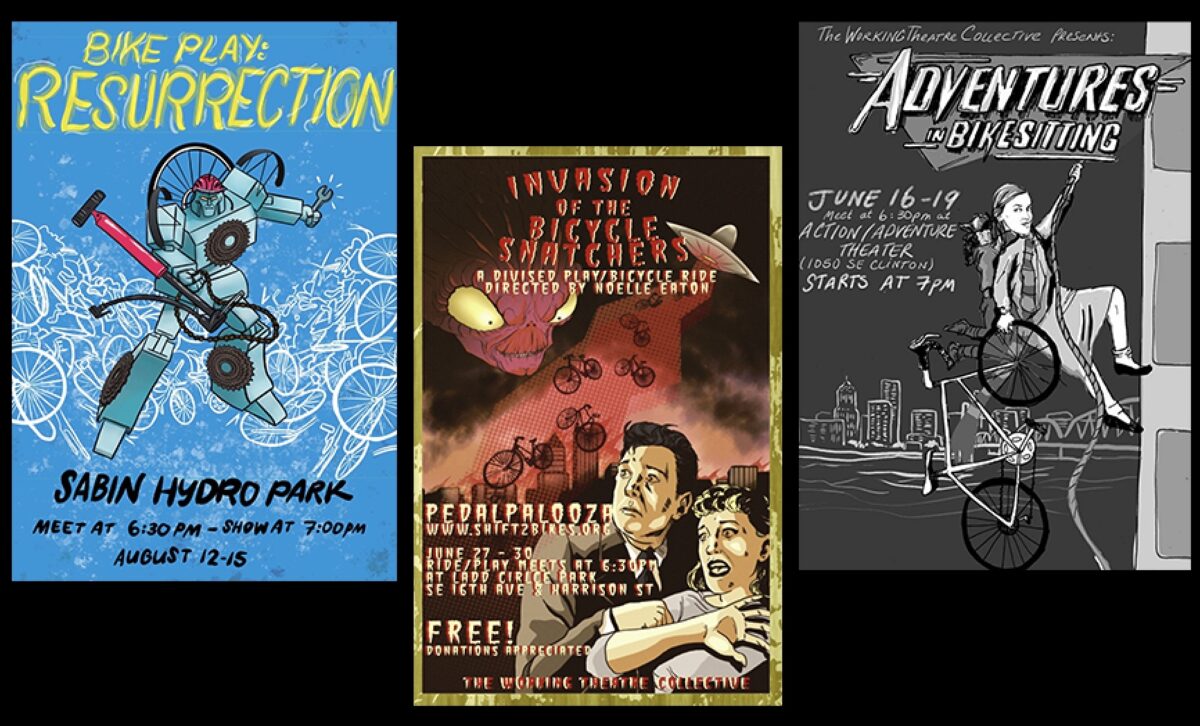 Hearken to the episode to listen to concerning the time it rained so arduous nobody confirmed up, when Noelle’s hair caught on fireplace, the one shocking expertise it takes to earn a spot on the forged, and why it’s best to all the time carry a motorbike gentle with you whenever you see the present. There’s even a candy section on the finish when Kristopher’s dulcet tones serenade us in a solo model of the Bike Play theme music!

To attach with Bike Play, you could find them on Instagram or on their web site.

And don’t overlook to subscribe to the BikePortland Podcast so that you don’t miss the following episode (keep tuned for a more in-depth take a look at the 2030 Bike Plan and an interview with Tom Flood). We’re on Apple, Google, Spotify, and just about wherever else you hear.

And if you happen to missed this yr’s Bike Play, take a look at the video beneath (shot by Kristopher’s dad!):

— Jonathan Maus: (503) 706-8804, @jonathan_maus on Twitter and jonathan@bikeportland.org
— Get our headlines delivered to your inbox.
— Help this unbiased group media outlet with a one-time contribution or month-to-month subscription.